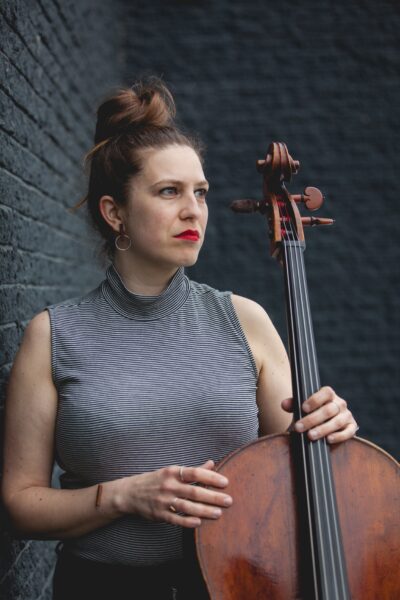 Élisabeth Giroux completed her studies at the Conservatoire de musique de Montréal in 2006 and was awarded the prize with great distinction by a unanimous jury. She then left Montreal to take part in a two-year world tour with the dance company La La La Human Steps. Élisabeth plays regularly as a supernumerary with the Saguenay-Lac-St-Jean Symphony Orchestra in addition to devoting her time to her creative projects and teaching. Élisabeth has participated in the recording of more than twenty albums with different projects and artists since her debut.

Her talent, her love for the cello and her attraction to other musical styles have allowed her to become, over time, a very versatile musician. In recent years, Élisabeth has become increasingly active on the Quebec traditional music scene. She has been collaborating with composer and multi-instrumentalist Jean-François Bélanger since 2015. In 2015, she also co-founded the trio É.T.É which offers rich and colorful arrangements as well as original compositions mixing the sounds of the violin, bouzouki, cello, voice and jig. The group has won several awards since its inception, including the OPUS « Discovery of the Year » award, the audience award at the Cabaret festif! de la relève, a Lucien at the GAMIQ, as well as being nominated at the ADISQ and the Gala des PRIX OPUS in 2020.

In the fall of 2020, Élisabeth has received a grant from the Conseil des arts et des lettres du Québec to study jazz, traditional and Celtic music with Eugene Friesen and Natalie Haas, both professors at the Berklee School of Music in Boston. She’s very glad to be now part of the Tradnation Collective for the years to come.