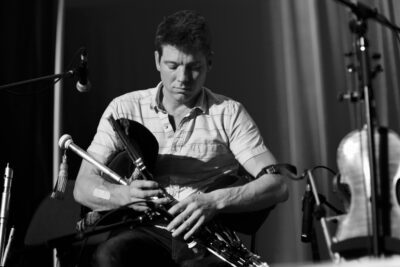 Fiachra O’Regan is a multi-instrumentalist living in Lanaudière. Originally from Ireland, he met Québécoise musician Sophie Lavoie in 2008 and the duo have played Traditional music from Quebec since. In 2014 the duo teamed up with guitarist André Marchand and formed the trio that is now Grosse Isle. In their music the trio explore the many Irish roots in Quebec, and its influence on the music here

Fiachra is originally from Co. Galway, Irleand. He started playing Irish music on the whistle at the age of 10. He picked up the banjo a year later and the uilleann-pipes after another 4 years.

Since starting to play music professionally he has received much recognition for his skills and has toured and recorded with many bands, and been lucky to play on stage with the likes of The Chieftains, Sharon Shannon, Eleanor Shanley, Seán Cannon of the Dubliner’s and Paddy Keenan of the Bothy Band.

He has appeared on RTÉ Television with Geanntraí, John Creedon’s The Fleadh Ceoil program and on TG4 for Donal Lunny’s Lorg Lunny, and his recorded works are played regularly on RTÉ Radío na Gaeltachta.

As well as performing, Fiachra is sought after as a tutor at Summer Schools, Festivals and for private tuition. Details of his work and achievements can be found below and in further detail at www.fiachrpipes.com