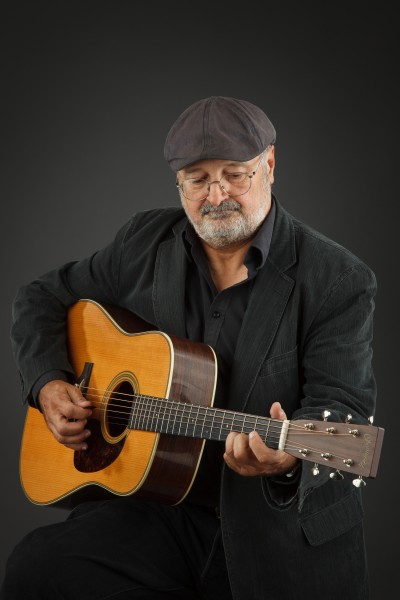 A leading figure in Quebec’s trad scene, André’s career is punctuated with artistic projects that have left a mark on the history of traditional music over the past 40 years. Guitarist and singer André Marchand began his musical career as the cofounder of the group La Bottine Souriante. From 1976 to 1990, he toured with the band throughout Quebec, Canada, the United States and a number of European countries, and took part in the recording of the band’s first six albums, the last of which, Je voudrais changer de chapeau, won a Juno Award in 1989.

From 1990 to 2009, he worked as a sound engineer and frequently as a producer. He contributed to the creation of nearly 200 projects, giving a voice to a number of emerging artists, in addition to well-known artists, and actively contributing to the rise of the genre.

In those years, André helped create various bands that would play a determining role in his career. His collaboration with Lisa Ornstein and Normand Miron gave birth to the trio Le Bruit Court dans la Ville, as well as an album of the same name that would garner much praise. Then, in 1992, a meeting with Gray Larsen culminated in the creation of two albums, The Orange Tree in 1993 and Les Marionnettes in 2004, as well as several tours that would take them across the United States.

Les Charbonniers de l’Enfer, an a cappella quintet that would explode onto the Québécois scene, were formed in 1993. The group recorded six albums, three of which won Félix awards in Quebec. They also toured and recorded an album, La sacrée rencontre, with the renowned national poet Gilles Vigneault.

A deep-voiced, warm and well-trained singer, André is an endearing character overflowing with good humour and a lively spirit. But it is undoubtedly due to his unique style of guitar accompaniment developed over the years that has most contributed to making his influence felt by an entire generation of musicians in today’s traditional music scene.